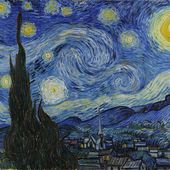 www.inglesesenzasforzo.com
Vincent van Gogh was known to be one of the famous and well-renowned painters in the history of art. His works were considered by the world, the works of a genius. One of his masterpieces which brought him to the portals of fame and honor was the widely known and esteemed, The Starry Night. One may ask why The Starry Night is so popular. One might say perhaps it is because of the stars that make you dream. Vincent van Gogh, himself, described it literally as not one of the important pieces of art that he made. He, the creator of the masterpiece, probably had missed what was so mystical about the painting. The painting features a scene of a Dutch-looking town. It is mainly composed of stars ablaze in their own luminescence, picturesque town structures, and a bright crescent moon. The painting is exaggerated, as stated by van Gogh himself. It is like a replica of a beautiful night. A viewer might imagine himself in the scene, observing the night in peace and amazement. The night sky keeps the viewer’s eyes moving about the painting while following the curves and creating a dot pattern caused by its swirly pattern. There are rolling hills that generate an aura of serenity from the town structures. The silent yet bright and fiery dark shades from the window of the structures could spark a viewer’s curiosity of the wonderful dark and starry skies. A mysterious entity is then shown in the left of the portrait. It can be interpreted in different ways depending on who is viewing it. It creates a visual similarity from its pattern with the night sky. This similarity creates a sensation of depth in the artwork. Vincent Willem van Gogh was a Dutchman born on the 30th of March, 1853. He was known to be a painter of the post-impressionist style. Post-impressionism was used to describe the maturation of French art since Manet. Vincent practiced the used of vivid colors, distinctive brush strokes, thick application of paint, and unwavering subject matter about the realities of life. On the other hand, rumors about his death became widely known, positing that the artist died due to an illness brought about by incoherence and inactivity. The Starry Night was just one of Van Gogh’s many works. He grew up loving to draw and later matured as an artist. He had 2,100 artworks, including 860 oil paintings and more than 1,300 watercolor paintings, drawings, prints, and sketches. He mostly focused on drawing portraits, including himself and delicately beautiful things like flowers and scenic wheat fields. Some magnificent works of Vincent Van Gogh include: At Eternity’s Gate, Bedroom in Arles, Café Terrace at Night, and The Potato Eaters. The Starry Night was made with oil paint. It involves pigments that are bound with a medium of drying oil. The output of the process varies according to the painter’s choice of pigments and effects. It often shows sign of consistency in the painting. Oil Painting was first used by Indian and Chinese painters for their Buddhist Paintings. Its origin started in western Afghanistan and later migrated to the west during the Middle Ages. http://totallyhistory.com/the-starry-night/